Mick Taylor the legendary guitarist and former Rolling Stone with “Cotswold” Dave Jones following the sold out event at the Bacon Theatre to launch our charity. Mick joined the incomparable Ben Waters band, Eugene Hideaway Bridges with Patsy Gamble, Cousin Leonard from Australia, Tom Waters and many others  on a night of fabulous music, raising £6,000.00 for the charity.

Dave commissioned a song from Kyla Brox and her hubby Danny called Lifting The Blues for the charity and it is the second track on their critically acclaimed album Throw Away Your Blues .

Dave invited them to the gig to officially launch your charity by singing the song. A very special moment!

All of us at LTB thank you  from the bottom of our hearts for your wonderful support.

Look out soon for our next Bacon fundraiser Ruby Turner on Friday 24th March!! 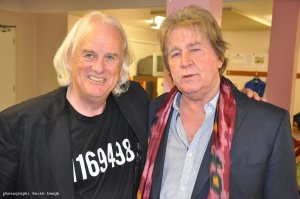